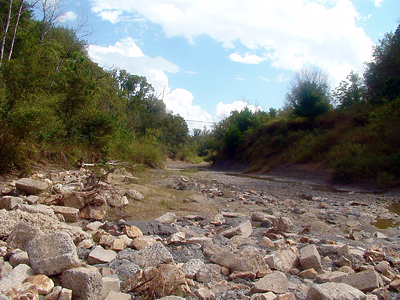 Streams and rivers are wonderful places to find a variety of rocks. By looking at the gravel in a stream, you can see bits of rock from many of the different layers that the water cut through. This can be very useful if you are looking for a specific layer of rock. Imagine that you are exploring a stream, and you find some pieces of quartz that contain tiny bits of gold. Gold! But only a tiny bit. If only you knew where those rocks came from, you might make a fortune. But this stream is more than a hundred miles long. Those rocks could have come from anywhere along the stream. How can you find where they came from?

Actually, it is not that hard. You start moving upstream, checking each gravel deposit to see if it has some of the gold-bearing quartz. If you see the quartz, then you keep going upstream. As long as the quartz is in the gravel, then you know that it is washing down from upstream. You are looking for the place where the quartz stops.

At that point, you start looking more closely. It could be washing out of the stream bed itself, but it could also be washing in from a smaller stream that feeds into this one, or washing down a slope into the stream. Follow any side streams to see of they contain any of the quartz. If they do, then use the same procedure again as you go upstream. Also look along the banks of the creek, looking to see if any of the quartz is there.

The key is to remember that the rock will be washed downhill and downstream. If you keep following the rock bits upstream, they will lead you to the deposit. This method is often used in locating deposits of gemstones and precious metals, but it can also be used to find other minerals, fossils, or any other layer of rock.