This large insect lives underground, and only comes out at night. Strangely, it is often found dead in pools of water. Why?

This is a Jerusalem Cricket (about 2 inches long). The reason that it is often found dead in pools of water is a parasite. A species of roundworm infects them, as well as grasshoppers and other similar insects. After living inside the host, and partially devouring it, the roundworm has a problem. It needs to be in water for the next phase of its life. It solves that problem by chemically changing the insect's behavior, causing it to jump into the water. At that point, the worm bursts through the insect (think of the scene from Alien), killing the host.

As strange as that may sound, there are quite a few parasites that change the behavior of the host. Toxiplasma gondii is a parasite that spends part of its life in rodents, and part of its life in cats. While in the rodent, it causes mice and rats to lose their fear of the smell of cats. They are still afraid of the smell of other predators, but not of cats. This makes them much more likely to be eaten by cats, which is necessary for the cycle to continue.

There are even studies that suggest that some parasites alter human behavior. I suspect that is true, and that I was bitten by the "science bug" as a child. 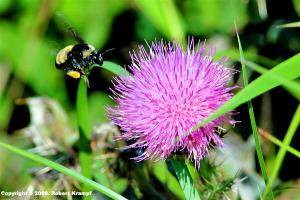 Question:
What is special about the wings of bumblebees?