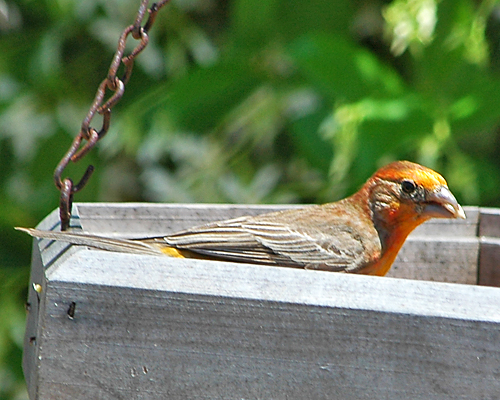 A new visitor to our feeder.

I bought some cheap birdseed this week, to use for time lapse photography of seeds sprouting. Since the seed was here, I put some out in the feeder, in place of the expensive seed that has been molding away, uneaten. Suddenly, the feeder was popular. A pair of cardinals started wolfing down the seed, followed quickly by several doves. Then these lovely birds dropped in. 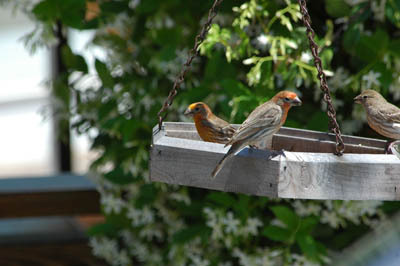 They are yellow variants of the House Finch.

They looked like Purple Finches, except the color was wrong. Instead of a purple-red color, the males had heads that were a light orange color. It took some searching, but I found out that they are a yellow variant of House Finch. Usually House Finches are red, but that red color comes from chemicals called caratenoids in their diet. Many red and purple berries contain caragenoids. If their diet is low in caratenoids, they can lose the red part of their color, looking more orange or yellow. That usually happens in the Southwest, where berries are scarce, but even there it is fairly rare (only about 5% of the population.) 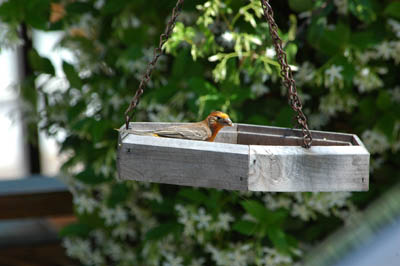 The same color loss can happen to other birds. Flamingos that are kept in captivity can lose their red color, unless they are fed a special diet. In the wild, they get their caratenoids from crustaceans, like shrimp. If you have even seen the red color of a cooked shrimp, crab, or lobster, you have seen the color of those caratenoids.

Its a good thing that the same thing does not happen with our hair. Otherwise, my hair would look like cherry ice cream.

In the Eastern US, they usually get plenty of red color from pigments in the berries they like, but these guys must be on a low berry diet, but they sure seem to like cheap bird seed.