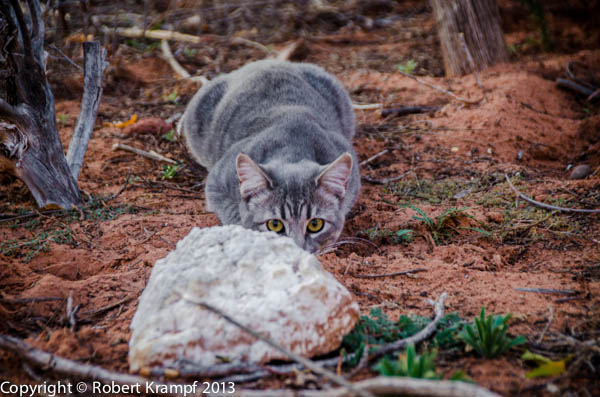 If you have ever watched a cat preparing to pounce on its favorite toy, you may have seen it wiggle its back legs from side to side just before it leaps. Why do they do that? It would seem that the movement would alert their prey, so there has to be a good reason for the behavior. To understand that, we need to learn a bit about muscles and tendons.

Muscles move us. If you want to raise your hand, take a step, or pick up a bowl of ice cream, your muscles do the moving. They do this by contracting, changing their shape to be shorter and thicker. That contraction causes the muscle to pull.

Often those tendons are compared to the strings that move a puppet, but there is much more to a tendon that just acting as a string. Tendons are stretchy, and as they stretch, they store energy. Instead of strings, imagine your tendons as rubber bands. You can store energy by stretching a rubber band, and then get that energy back by releasing the rubber band to fly across the room. We often do the same thing with our tendons, storing energy to get a sudden burst of power.

To examine that, you will need:

Pick up one of the tennis balls, and get ready to throw it as far as you can. As you move your arm into position, pay close attention to what your muscles and tendons are doing. Why do you tighten your muscles? A muscle that is already contracted does not help you move. Throw the ball as far as you can.

The ball probably did not go as far this time. Why? The first time, as you drew your arm back, you tightened your muscles to stretch the tendons in your arm and shoulder. Stretching those tendons stored energy. When you threw the ball, muscles in your arm and shoulder contracted to move your arm. At the same time, your tendons released their energy, just like releasing a stretched rubber band. That extra energy helped the ball go farther.

Now, lets try it one more time. Get another tennis ball, and very slowly move your arm into position for throwing. This slow movement simulates the cat slowly stalking its prey. Once your arm is in position, notice the sensation of your muscles and tendons. There is some “stretch” to the tendons, but probably not as much as for your first throw. Also notice that by moving very slowly, those tightened muscles are getting a bit tired, probably not giving their best stretch.

Instead of throwing, put your arm back down by your side. Then very slowly move it into position again, but this time keep your muscles fairly relaxed. Once your arm is in position, then begin to tighten your muscles. As you do that, move your arm slightly from side to side, just as the cat does with its back legs. That slight movement helps your muscles stretch the tendons, storing extra energy. Once you feel that you are ready, throw the ball. It should go at least as far as it did the first time.

Your cat keeps its muscles fairly relaxed as it stalks. That lets it move very slowly, without tiring its muscles by trying to keep the tendons stretched. Once it is in position, it tightens the muscles, and uses that slight wiggle to help stretch the tendons a bit more, storing energy for the final pounce.